The Book of Winter Fireworks 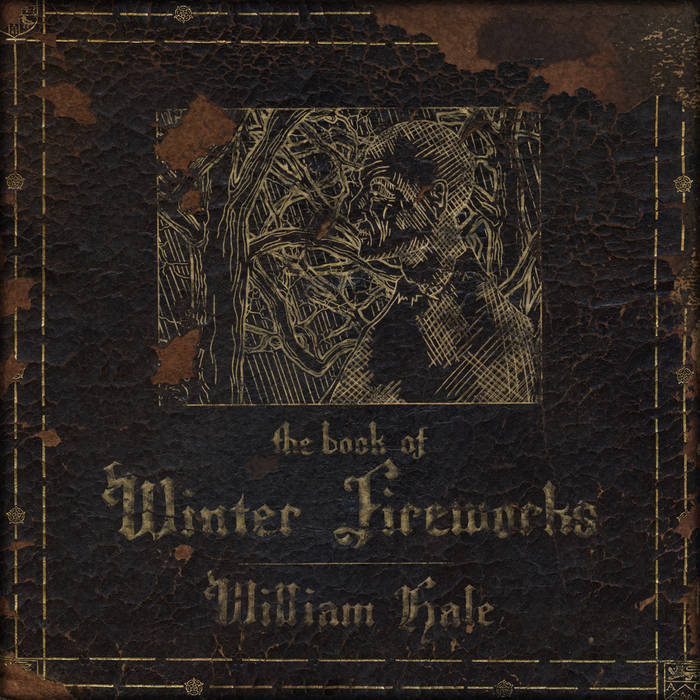 "The Book of Winter Fireworks" is William Hale's first official release. Recording began in April of 2009, though most of the tracks were conceived and written in years prior. three years and three months later, we are pleased to be able to share it with you all.

All songs written and performed by Lucas William Hale VanScoy.

Track Name: Winter Fireworks
the sporadic taste of winter
lays its waste across my fingers
as i try to trace the movement
of my body to a warmer place
but everything has become much better
with a vast exception to the weather
i like that we can lay together
i'm glad we can pronounce forever

my fingers are your matches, lord
i use them to strike the chord that gets me high
there is no other way to fly.

this music allows me to express
to sort out all the added stress
of getting by from day to day
without blowing myself away
and so you know, these words you hear
are nothing if they are not sincere
i feel they give the right impression
of everything i dare not mention

but i'm not looking for attention
judge me by my words and actions
they are what i really am
i strive to be an honest man
though sometimes it may sound abstract
it's just in what our language lacks to say
but i know there is no other way.
Track Name: Prisoner of Sound
hey , prisoner of sound, what are you finding new
in the things that you've already found
time after time, night after endless night
days you spend in the flattering light
there is no wall, trying to hold you back
but there's no sense in letting it go
knowing what you know.

down in the town of your youth
you are searching for truth
among people who lie to themselves
pretending you've always been somebody else
but what is there to do?
tomorrow will be the same.

for years you've been in love with the peace of the morning dove
its harmonious songs from above
your life is a show, but that white bird becomes a crow
and when you realize you have nowhere to go

you'll escape without saying goodbye
to the cycling chances
the enchanting illusion of home
you know that you've grown
and that miracles never come.

but what would you say if i asked you to stay with me?
i've heard your prayer, and i beg you to let me.

but oh, child of glass, you're letting the moment pass
without asking what it might become
don't try to run, i'm coming with open arms.
Track Name: The Balance
you must know what is true, to yourself
there is wisdom in truth and in lies
it's a scale reaching out from a shell
never equalling its own two sides
it's the balance between love and hate
it's the question and answer complete
but it's left over for you to create
it's left open, but it's full of deceit
there is a season for all that you see
it stretches as far as you are willing to look
the convergence of nature and man
i have written it down in my book

you must know what is death and what is life
it's a circle, but it has many sides
and the value of what it surrounds
is where universe and spirit collide.

in the winter when magic returns
it is hard to find someone who cares
so lite a firework to watch as it burns
and explodes itself off in the air
in the pages kept hidden for years
lie the secrets of function and fear
and the beauty of what we must do
is left open to me and to you.
Track Name: Sudden Autumn
All the green grass is dead
as the summer sun sets under clouds of fall
i can feel the sudden autumn in my head
but i'm not ready for change again
the future is a veil of smoke, we can't see through at all.

and where is my relief from this routine?
oh, the pace of the modern world is a race just to die
and all the while, i've considered it obscene
but now i must steady my brain again
i can feel on the wind that the winter's sting is nigh.
Track Name: Gates of Infinity
In our world of math and matter
life was formed inside the swamp
and now is climbing up the latter
knowing nothing of the top

so how can we get to know our spirit
if we won't talk with one another?
are we forgiven by religion
if we are not by our own brother?

than i will traverse this whole planet
and i will fuck until i'm free
and i'll die with a hundred children
to pass through the gates of infinity.
Track Name: The Body
The body underneath the dirt
purple body of the earth
do the hungry buildings hurt your skin?
or are your endless gifts to man
an attempt to right your sins?

Steady ears receive the word
and turn across the conquered world
searching hard for something to discover
but what could they hope to find
when each time they pass by one another?

i see, yet i am blind
i can never seem to find my way
on an aging earth, left to be explored
i can feel only what i can afford

oh parapet of human thought
see what havoc you have wrought
this generation has been taught to hide
but what will happen to our world
when all hidden wisdoms coincide?

and you could pick those ageless grapes
forbidden spheres of holy sight
fermented fruit of eden
tasting more of sulphur than of wine.

on your own you see nothing
of hope or of beauty
the duty of solitude improves the mood you're used to
then is gone like the vapor
you exhale from every stranger you become.

but back a few miles is a smiling face
that is tracing your image
on every blank wall in her mind
just to find that the one she is seeking
has left her behind.
Track Name: Sharp Truth
oh sharp truth, inspired proof of life
i strive to map your use.
abuse this trust, my spirit rusts and thrusts
out through this singing fool.

oh wretched waste of empty space
just face up to your own desire.
inquire forth, lest ye forget
to light your cigarette on fire.

my friend, where have you been?
i thought i would not know you.
and now there's just regret
for the things i could not show you.

my friend, where have you gone?
some city in a shadow.
to see if you belong.
and all so slow and sudden.

oh blessed trend of things that end
in distance and in poverty...
you made the choice to find your voice,
but only its echo reaches me.
Track Name: Caverns of Coal
With all of the things that are good in my life
it's a wonder i ever would depart from there
but this town drives away every love that i find
it consumes me with secrets that i never will share.

there is a crust which has developed on the surface of my soul
and thorn which has torn through the skin of my heart
but in every forgotten cavern of coal
there are diamonds that burn with the power of the stars.
Track Name: Pressure
we had tried to work it out.
applied pressure to the front of your head.
you control an empty shell,
but i control where i lay in my bed.

If I choose to close my eyes,
i may never see this world again.
would it come as a surprise
if i woke someplace that i've never been.

It's getting harder to trust in the things that i know.
I am a lier, and i have to be ready to show
what i am made for. but what am i made for?
and what has been made for me?
i am the front door. i am the water.
a wave in the vast open sea.
so call me your brother, call me your father.
i'm a holy and spiritual man.
a man of delusion. a man of religion,
who will break on a shore of soft sand.

and each grain of sand is its own little cell.
and each nucleus will burn with its electrical smell.
which way is up? it is so hard to tell.
i can't tell.

but i've tried to work this out.
held my hands as tight as fists in the air.
and i could fill your empty shell,
but it would not get me anywhere...

Bandcamp Daily  your guide to the world of Bandcamp

Featuring Oakland sounds from the Smart Bomb collective and Samplelov.